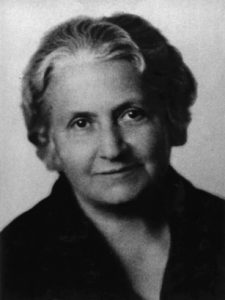 When we hear the name Montessori, we probably think of hippy parents with children running wild. The questions I’ve heard from many parents when considering how to start their children in school are usually around command and control: Don’t they need to learn discipline? How will I get them to listen to me? How will I get them to do what they are supposed to do? These simple and seemingly obvious questions reveal a lot, not only about how we view Montessori education, but also how we view human nature and the structures of reality itself. Maria Montessori, who we canonized this past Sunday, had a radically different view of who we are as human beings and how we might develop as a society.

When Jesus exhorts us to come to God as little children, we commonly think that it means to abandon our reason and experience, to engage in a fantasy about how the world is. We do this because we think that children are stupid and undisciplined, barely worth basic dignity. The job of the parent then is to educate them and discipline them into a character capable of joining society, of being worthy of dignity. We give them gender-coded toys and encourage them to play house, so that they learn their place in the world of adults. Then we mark the failures of the parents by denying dignity to those who do not accept their place. Instead, Jesus asks us to become like children, already possessed of their own dignity and worth.

Jesus cites children’s humility and suggests that we humble ourselves similarly (Matthew 18.4). If this language is approached from within the framework of power and control, we get the perverted circumstance of people in power exhorting the marginalized to be humble. But look what Jesus says next: “If any of you put a stumbling block before one of these little ones who believe in me, it would be better for you if a great millstone were fastened around your neck and you were drowned in the depth of the sea. Woe to the world because of stumbling blocks! Occasions for stumbling are bound to come, but woe to the one by whom the stumbling block comes!” When Jesus speaks of stumbling here, the word is skandalizo, where we get the words scandal and scandalize. That is, to make a child stumble is to push them off the Way, to put barriers between them and God. This is the thinking that is embedded in the law and the prophets: there is a Way that is God’s way and that is the way of justice and peace. To be scandalized, to stumble, to be blocked from this way is to be mired in the reproduction of injustice. We become offensive to God; we become scandalized. So, the opposite condition, the condition of humility, is to be on the Way to God, on the way to creating justice and peace, which Jesus understood the children to be naturally on.

Maria Montessori’s biographer said of her: “In fact her whole life’s work could be summed up as an effort to bring to an end the agelong struggle which has been waged and is still being waged between the Child and the Adult, a struggle which […] is no less real because it is carried out unconsciously.” Whenever I speak of undermining systems of power or non-hierarchical organizational models, I am inevitably met with the notion that hierarchical power is in the nature of the universe and the primary evidence cited for this is the relationship between adults and children. Certainly, adults must have power over children. Children must be disciplined to obey and submit. And in capitulating to this essential quality of nature, as children, we learn that there must always be someone with power, someone to whom we must submit – “You gotta serve somebody,” as Dylan said. We understand that there are winners and losers and our task is to be a winner. Montessori understood, as Jesus did, that these kinds of power relations are not the nature of reality and that, in fact, living into them is counter-productive to the creation of justice and peace that God seeks. Children know the Way; if we would observe them the way Maria Montessori did, we would know the Way, too.

Montessori’s work began in educating children, but her vision quickly expanded. She understood herself not as the purveyor of miracles, but their witness. She was the beneficiary, not the kids. She thought we might all be beneficiaries if we humbled ourselves to pay attention to the inner lives of children. She understood “education as an armament of peace.” When, late in life, she saw the horrors of nuclear weapons, she “always directed us to the light and lesson of the child – to discover and free the child’s true nature to create a new and better humanity” (Lee Havis in the introduction to E.M. Sanders’s biography of Montessori). Sadly, we have doubled down on power and control and we see where it has gotten us: mass shootings, a renewed threat of nuclear war, and a generally divisive, violent, and aggressive world.

In Maria Montessori’s earlier writing, she understood the difference between children and adults to be that children continue to grow, to undergo a kind of metamorphosis, whereas adults do not. But she was never one to stay fixed in her thinking if evidence showed her otherwise. As we understand now, she learned that adults continue to grow and change and we have our own developmental needs up until the end. Unfortunately, she didn’t have a chance to pursue that line of research before her death in 1952. Perhaps others have. But it got me to wondering what it would look like for adults to engage the Montessori Method.

There are three basic principles in Montessori: 1) observation; 2) individual liberty; and, 3) preparation of the environment. In a Montessori classroom, the teacher observes the students non-judgmentally. It requires deep inner preparation to remain calm and controlled and to be aware of one’s biases in observing others. If we reflect on our own judgment of others, it is often an attempt to control their behavior, to have it conform to an ideal that is non-problematic for us. What if, instead, we approached others with openness and curiosity, as beings possessing their own dignity and capable of teaching us? We speak often of freedom in this country, but everything from education to policing is based on the assumption that people who are left to their own devices will do bad things. What if, instead, we gave people the freedom to discover their own path and their own essential goodness? Ironically, it seems that the only place we truly encourage freedom is in allowing injustice to persist. We allow developers and city planners and policymakers to create a world that is hostile to people and then act surprised when people become hostile. What if, instead, we prepared our environment to a human scale with the goal of human flourishing?

Maria Montessori once said: “Averting war is the job of politicians. Establishing peace is the work of educators.” What if we were all educators for one another? What if we were all prepared to be educated by one another? Or what if, as Jesus said, we were able to humble ourselves as little children, to remove the barriers to our natural inclination toward the way of God? It is easier said than done, especially after all the stumbling blocks from our non-Montessorian beginnings. But St. Maria believed, as did Jesus, in the ongoing possibility of rebirth. She said in admiration of children: “I will follow you, to enter with you in the Kingdom of Heaven.” Then, to herself, “And holding in my hands the torch of faith I went on my way.” May we, with the torch of faith, find that way as well.