Let me start by admitting that I know little about our selection for this week’s saint: St. Francis of Assisi.  I have an image of him, but I think I get him confused with Snow White.  But as I read the Wikipedia article on him, I found some bits of information tucked away in the recesses of my shabby memory.  Most notably, Francis was a reformer.

By the Middle Ages, the Church had acquired quite a bit of power and wealth.  It was a relatively prosperous time.  Because the Church was the gatekeeper for Heaven, the wealthy were generous.  And, although priests and monks could not technically own property, they had use of what the Church owned.  Beginning in the 12th century, this generated a reaction, not unlike we have seen in Pope Francis eschewing the luxurious trappings of the papacy.  A reformer named Valdes established a mendicant order committed to poverty.  There was some question about whether such an order could be truly Christian, but they were accepted when they acknowledged that not all rich people will go to hell.  However, they were not allowed to preach unless by permission of local clergy, the ones with all the land and money.  Conflict ensued and soon poverty was equivalent to heresy.

Francis followed in the tradition of Valdes, choosing to be poor.  This son of a nobleman humbled himself, gave up his birthright, and lived in poverty.  In so doing, he found an infinitely deepening compassion that extended to every part of creation.  He reportedly preached to the birds.  Another story has him acting as a peacemaker between a wolf and a village it was terrorizing.  He thought of the sun and moon as his brother and sister.  And he thought that this kind of experience, this solidarity with those are impoverished and those who suffer, was the key to reform.  He was a great preacher, but his real strategy was to simply live as Jesus lived.  If he could walk in Jesus’ footsteps, it might change the Church and change the world.

Today, Francis is the most popular saint.  I fear this is because we do get him confused with Snow White.  Who doesn’t like a man who is kind to animals?  But we shouldn’t forget why he was kind to animals.  For Francis, like Hildegard, all of creation is the arena in which we encounter God.  If we humble ourselves and forget, even for a moment, about the things made by human hands, we might notice God at work.  We might see ourselves and our neighbors more clearly.  We might understand that everything and everyone is an opportunity to know God.  Perhaps, the animals will talk back.

Please join us this Sunday, 11am at Kidd Springs Park by the West picnic tables, as we celebrate St. Francis.  There will be a pet blessing, so please bring leashed pets or pictures of those who are unable to attend.  There is currently a 50% chance of rain.  If we’re on the wrong side of that 50% on Sunday morning, we will move back inside to the Rec Center, which means no pets.  In that case, bring pictures of your pets and they will be with us in spirit.  Also, the service will end with a potluck meal.  If you would like to bring something, please visit our VolunteerSpot page for the event.  See you there! 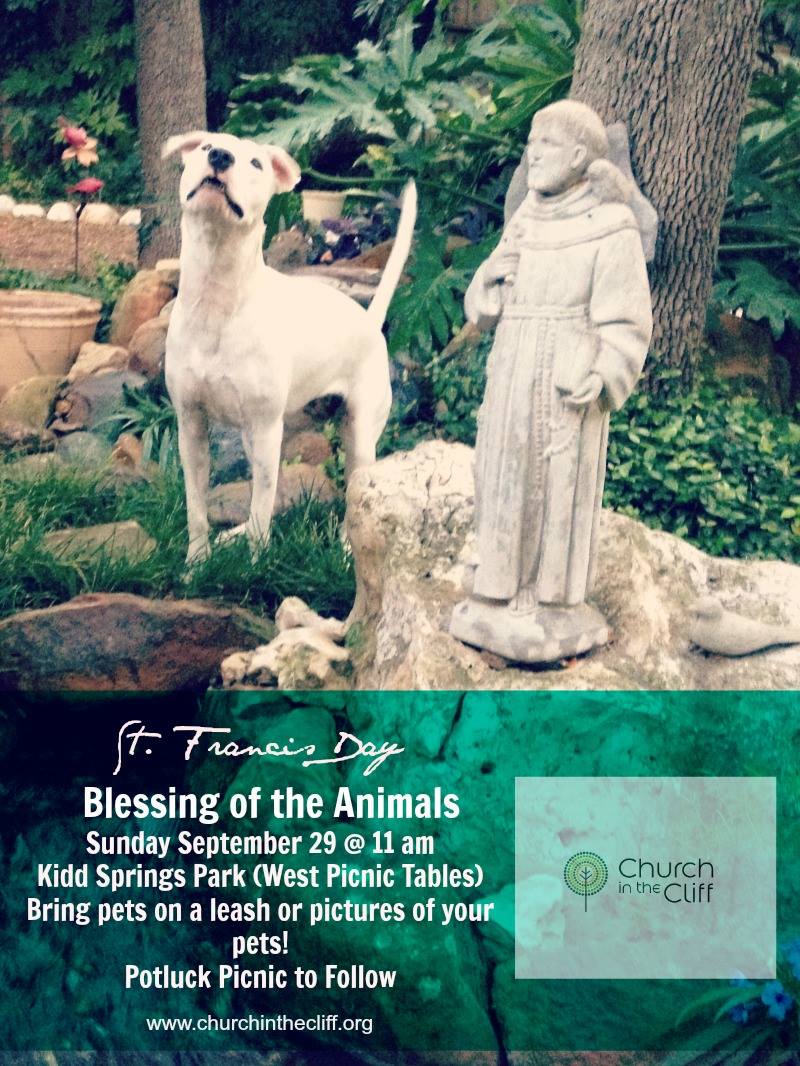