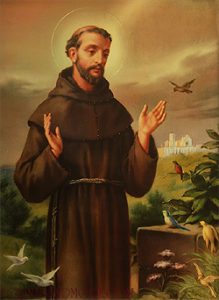 I’m not sure there is a more beloved saint than St. Francis in all of Christendom. Even Protestants revere him. What’s not to like? He preaches to birds, for Christ’s sake. So every year, churches all over the world honor St. Francis by having a “Blessing of the Animals” service. It’s the one day a year that most churches allow you to bring your dog to church. (Maybe I’m bragging, but you can bring your dog to Church in the Cliff anytime!) It was a lovely day on Sunday. We moved outside, so the animals wouldn’t feel so cramped and so we could experience the sunlight dappled beneath the live oak trees. Sure, it’s just a median, but they’re nice trees and the weather was perfect. We were trying to at least get a glimpse of how St. Francis viewed the world. I wonder how well we succeeded.

St. Francis was born in the late 12th century, the son of a wealthy silk merchant. He enjoyed the fruits of prosperity, a typical young man of means. But around the age of twenty, he had some experiences that changed him. He was captured while fighting for Assisi and spent a year in prison. When he returned home, he was different – he gave his dad’s sales revenue to a beggar – but gradually returned to his lavish life with his friends. About a year later, he became gravely ill. When he recovered, he took a pilgrimage to Rome and sat with the beggars outside of St. Peter’s Basilica. This inspired him to take a vow of poverty and preach on the streets all over Italy.

St. Francis’s love of nature came out of his commitment to poverty. He was outside a lot. He depended on other people and on nature for his food. It is clear that he came to see all of creation as a partner in his life and an inspirational beauty. But I also suspect that he came to know the truth about poverty and nature, which is that nature hits the impoverished first and the hardest.

Last night, we took the train to and from the Wilco show in Irving. Since Lisa has given up driving, public transit is always her first thought. I had planned to drive, but had to admit that avoiding traffic in the rain was appealing. My concern was the return trip. We would be coming back to West End Station after midnight. It’s a motley cast of characters in the day; I could only imagine what it would be like at that hour.

The trip out was sparsely populated with people coming home from work. We walked from the station to dinner while it was still dry; the deluge busted loose while were eating. While we were wondering if it would let up before we walked from dinner to the show, every homeless person in Dallas was trying to find safe refuge from the lightning and the downpour.

On the way home, the passenger demographics shifted. There were a few others coming back from the show, but there were also homeless people. The train is not just a refuge from the rain, but a safe place to sleep. As we boarded for home, there was one person bundled up so tight in layers of clothes and trash bags that you could hardly tell if there was a person under there. As we got closer to downtown, the “people like us” got off and more homeless people got on. Perhaps the events in Las Vegas have made me a little extra paranoid, assessing everyone I see, looking for exit routes, figuring out the tactical advantages of one train seat over another. I could see the reflections of the other passengers in the safety glass in front of me – I watched.

As soon as we stepped off the train at West End, there was a barefoot man with shabby clothes and weird hair talking to no one. Francis wore shabby clothes, went barefoot, had weird hair, and talked to apparently no one – the birds, the sun, the moon, in his thinking. Some called St. Francis alter Christus – “another Christ.” I did not see this man this way. He was weird and unpredictable and frightening. I saw him as a threat, not a person or, least of all, the incarnation of God. Of course, I can justify this by saying that there is a sense of self-preservation, not to mention protection of the one I love. Still, isn’t that the point?

By spending time with the poor, St. Francis chose poverty to live in solidarity with those who were impoverished. He had no thought of self-preservation. Neither did Jesus. It is the hardest instinct to overcome, our need for safety and security. Yet, that is precisely what God asks of us. I spend some amount of time around homeless people, but I notice that it is always within the safe confines of service. I’m offering a meal. There are regulars. I know their faces. I’ve sat and talked with them. There have been incidents – occasional yelling, maybe a scuffle, a psychotic break or two – but I’ve never felt unsafe. Perhaps it’s time I did. As with Jesus and Martin Luther King, if we let go of the sanitized version of St. Francis that asks so little of us, I wonder if we would revere him still.