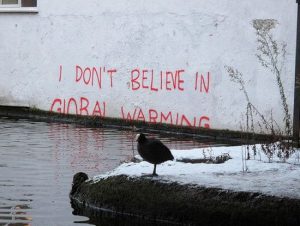 Last week, we were coping with despair in the face of immense problems. This week I made the turn toward anger. The chapter we read in Patricia K. Tull’s Inhabiting Eden focused on the prophet Jeremiah. The background of the scene is that the Babylonians are poised to siege Jerusalem. Jeremiah is going around telling everyone of the danger. He even goes so far as to bind himself in an ox yoke to illustrate the future of the people of Israel. Still, no one listens to him and he is angry.

But to whom will I talk and give a warning,
that they will hear?
Their ears are covered over —
they cannot listen!
The word of YHWH is to them
an object of scorn —
they take no pleasure in it.
But I am full of divine wrath.
I weary of holding it in.

He holds particular contempt for the religious folks:

From prophet to priest —
all are frauds.
Carelessly they treated the wounds of my people,
saying, ‘Peace, Peace,’ when there is no peace!
They should all be ashamed
of their loathsome conduct.
But they have no shame —
they forgot how to blush.

On climate change, the Babylonians are at the gates. The seas are rising. There are places on Earth that are simply becoming too hot for people to live. Extreme weather events, ranging from flood to drought, are becoming more and more common. And yet religious leaders are telling us that everything is fine. Tim Walberg, a Republican congressman from Michigan, told constituents that God will take care of climate change. Robert Jeffress applauded our withdrawal from the Paris Agreement. Franklin Graham took Nancy Pelosi to task for saying that our withdrawal dishonors God.

I do believe that God will take care of climate change. God does so in prophecy. Prophets always do three things: 1) name the problem; 2) name the consequences; and, 3) provide a way out — repentance, turning back toward God’s ways. On climate change, scientists are our prophets. Al Gore is a prophet. They are sounding the alarm, showing us the consequences, and giving us an alternative way forward to avoid disaster. Will we listen?

I am afraid that our current leaders, both political and religious, will not. A fever has taken hold in the American conscience that sees others as the enemy rather than as neighbors. Don’t tax me to pay for other people’s education. Don’t ask me to care about police shooting people that don’t look like me. Don’t ask me to drive less so that future people will have a habitable planet. And what does God care about such things? As Franklin Graham says, only sin dishonors God and sin is only what others do in their most private moments.

But all of these things come back to bite us.  A poorly educated populace elects terrible leaders and is ill-equipped to face the challenges of tomorrow. A militarized police force eventually shoots a white yoga teacher. And if we do nothing, our planet will no longer be fit for human life. To quote Jeremiah one more time:

Hear this, earth:
I am about to bring disaster upon my people —
the fruit of their own schemes.
For they did not heed my words;
they rejected my instruction.

This is God’s judgment, but there is a way out. Repent. Perhaps it is just because it is my milieu, but it is also because the voices of faith leaders loom large in the national conscience. If folks like Jeffress and Graham can give people a way to not care about the world, people will feel absolved of responsibility. We need to change the way that the faithful think about climate change. We need Christians to care. I think that starts with highlighting some of those who do. Folks like Russell Moore, president of the Ethics & Religious Liberty Commission of the Southern Baptist Convention, the moral and public policy agency of the nation’s largest Protestant denomination. Folks like Calvin DeWitt. Kyndall Rae Rothaus and the folks at Lakeshore Baptist in Waco. And, of course, all the folks at Interfaith Power and Light. There are Christians — even conservative Christians! — who take care of the earth seriously. Let’s join with them and amplify those voices so that every Christian knows environmentalism is the Gospel and they can preach the Gospel in word and deed. Amen.